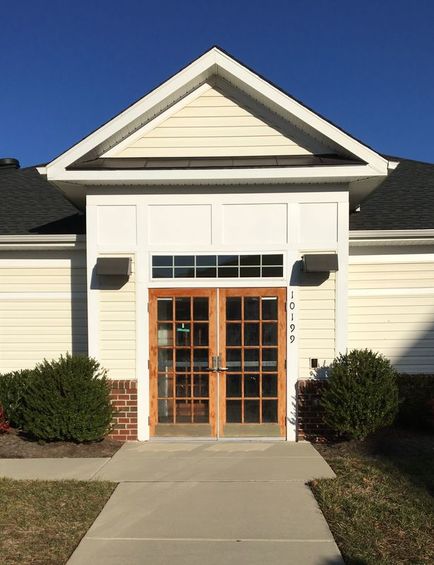 The Gatherings At Wellington Community Clubhouse

The purpose of this committee is to have fun and host several events each year for the community.  These events will vary in scope and cost.  Some will cost members nothing and some will cost more.   Not everyone will want to attend all the events so variety is high on our priority. 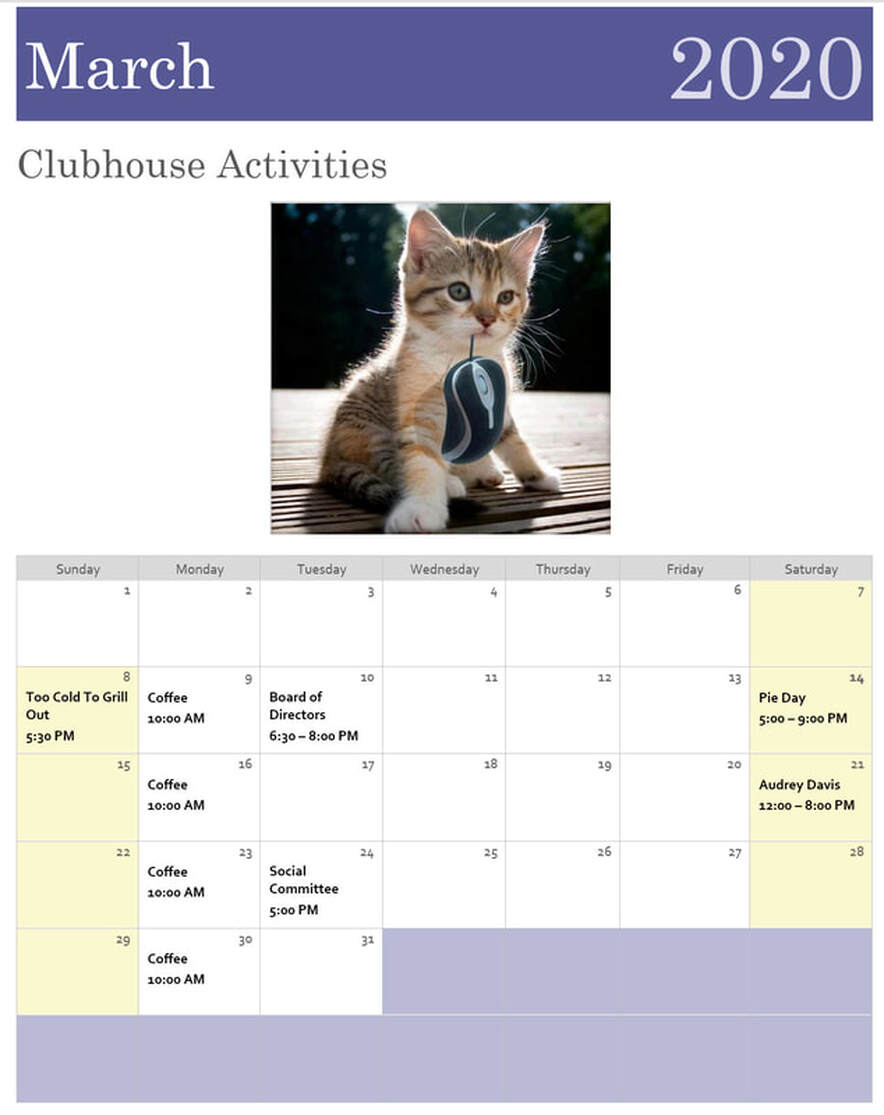 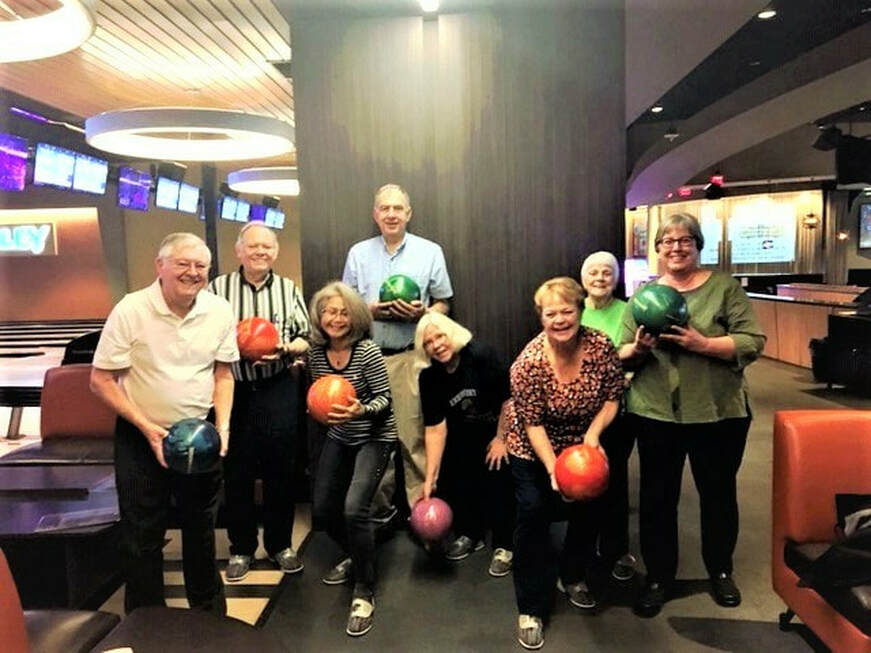 ​Our first bowling outing was a success. Our intrepid bowlers were Billie and Gerry Moore, Judie Smith, Ed Chanen, Matt Berg, Maureen Ford, Theem Siler and Alison Prevost. We were cheered on by Sue Berg and Betty and Johnny Ling. It was great fun and we will definitely do it again. We hope more folks will join us.

Fine Friends and Their Food Ring In The New Year

Residents of The Gatherings got together in the Clubhouse on New Year's eve to enjoy each other's company and the lucious dishes they brought along in the final Social Committee event of the year.  The maestro of the event was Alison Prevost the Committee Chairperson and from the looks of it this was still another sumptuous event that she and her committee made available to us.  Thank you Alison.  Thank you Committee and Happy New Year to everyone who made this thoughtful get together both possible and delicious.  Now that the pictures have been taken everyone can dig in.

Have These Residents Gone Bananas? 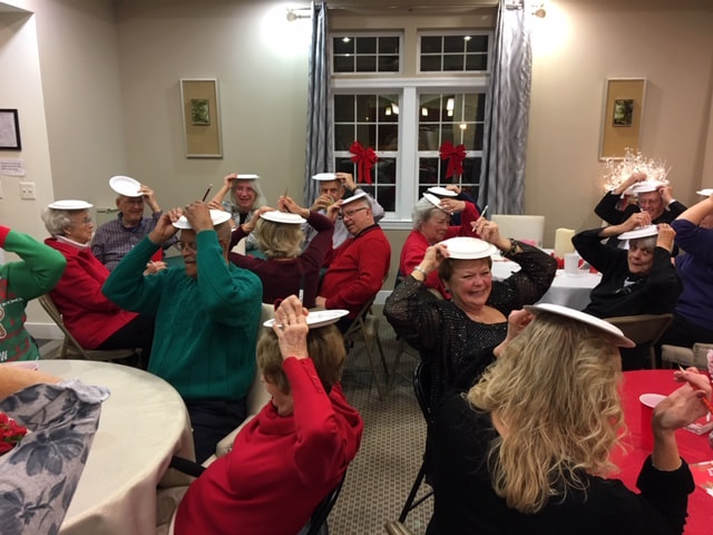 This a scene from the Holiday Party the Social Committee held on December 14th in The Clubhouse.  What you are looking at is a game they played in which they had to draw a Christmas tree on a paper plate while they were holding the plate on their heads. Did it look weird? You bet!  Did they have fun?  Absolutely!  More photos courtesy of Claudette Sylvester and Social Committee Chair Alison Prevost are below. 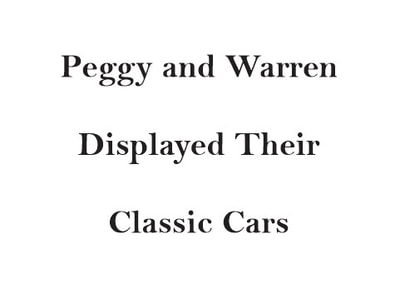 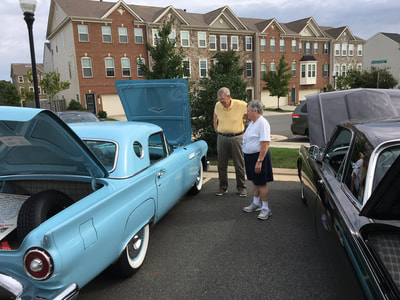 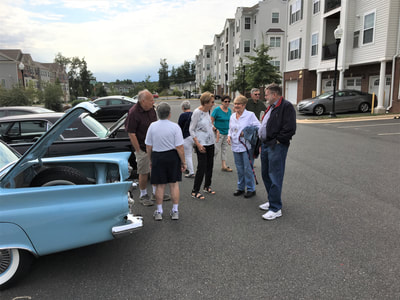 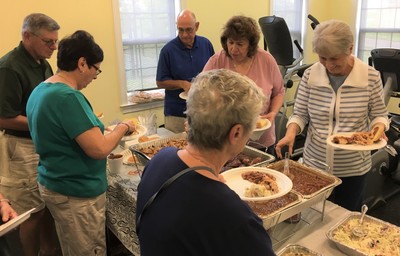 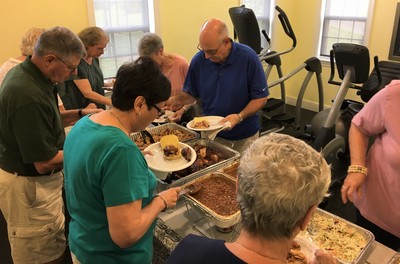 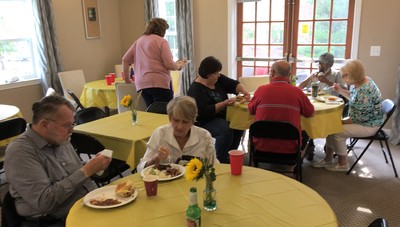 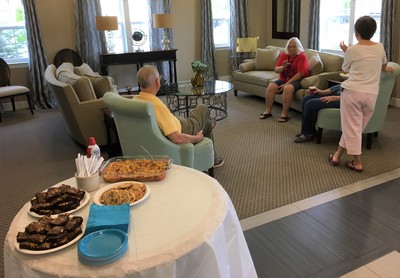 You're A Little Late But Join The Party Anyway!

The Holiday Party that was held in the Clubhouse on Saturday, December 9th was quite a success and featured a surprise guest.  George Bango took some photos of the celebration and your web master added a little music to it and came up with the following short presentation that gives you a good notion of the great fun everyone was having at this holiday get-together. You can enlarge the picture by clicking on the double pointed arrow in the lower right hand corner of the screen once the slide-show begins. Press the Escape key to return to your browser. P.S. Make sure your sound is turned on.

Why Is This Man Smiling? 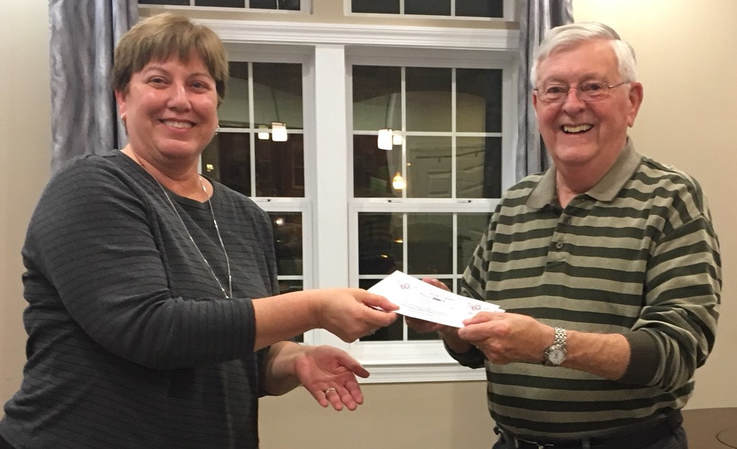 Chairperson of the Social Committee Allison Prevost is seen here presenting HOA VP Gerry Moore his prize for winning the Turkey Trivia Contest at a Friday Night Social.  It's a gift certificate to Victory Wings.

The Gatherings at Wellington Village

​The Monday Morning Coffee at the Clubhouse has been a hit and will continue as long as there is good participation and everyone is enjoying themselves. Monday Mornings at 10 AM. No RSVP, nothing to bring, just come and start your week with friends.

We will be starting Table Games every Wednesday afternoon at 1 PM in September.  NO refreshments served, bring your own if you want. If you don’t know how to play the game, a 5 minute lesson and you will be a pro,.

Thank You For Thanking Us For Our Service

The Social Committee outdid itself on Saturday morning September 11th when they honored the U.S. military veterans living in The Gatherings with an invite for a morning party in their honor.  The Clubhouse was filled with former service members and relatives of service members.  They were welcomed with wonderful homemade refreshments accompanied by the musical anthems of the branches in which they or their loved ones served.

Every one who attended was asked to bring a photograph either of themselves or a member of their family who had been in the armed forces.  The pictures were nostalgic reminders as some of the participants used the occasion to warmly remember husbands and relatives as they had looked in their uniforms decades ago. The highlight of the get-together was when many of the veterans rose to tell their personal stories. These stories took the Clubhouse audience on adventures around the world carried out in airplanes, ships, tanks, submarines and of course on foot.

The final story was not from a service member but from a former German citizen who was a child in the Second World War and saw war from the other side.  Dagmar Kirsop related what it was like for her and her family to endure those perilous years under Hitler's regime.  She was there, as a child,  enduring the intensive bombing of Germany carried out by many of the people we honor on Veterans Day.  She was also in Berlin during the historic airlift to save the city and never wants anyone to forget what war is really like. She, and millions like her throughout the world, are the living proof that the time many of us spent in the service was well worth it.

​So, thank you Social Committee and Gatherings Veterans for creating a few hours of camaraderie that will long be remembered. Thank you for the gracious and thoughtful way in which you thanked us for our service.

​The controls to pause and play the slide show can be seen when you place your cursor over the photo being shown.

Memories of "The End Of Summer" 2017 Cookout 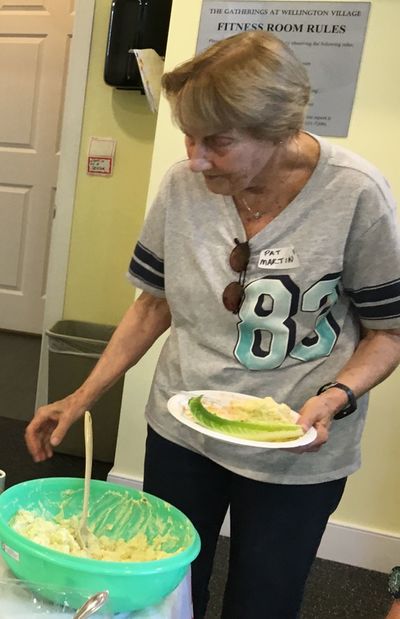 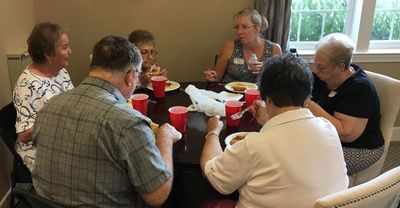 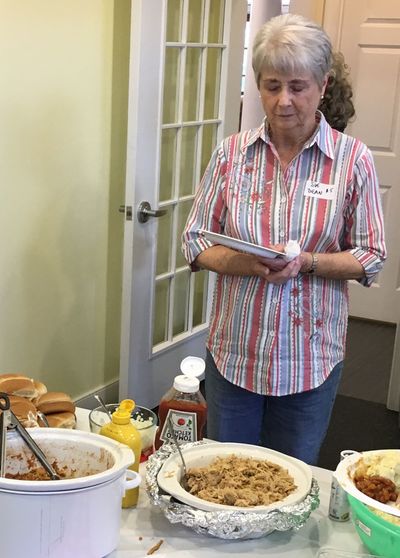 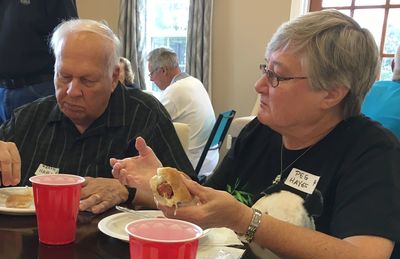 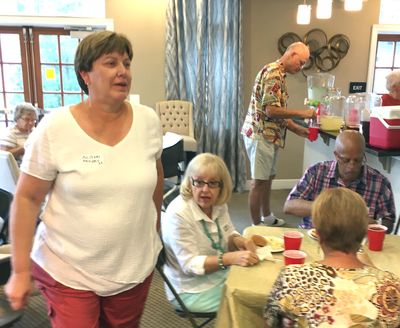 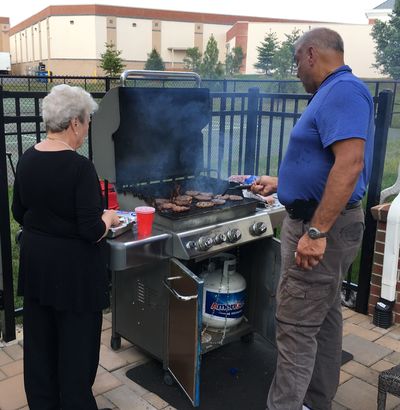 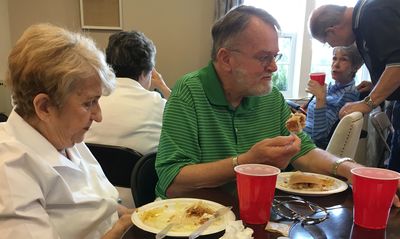 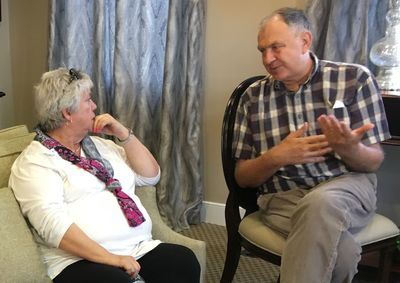 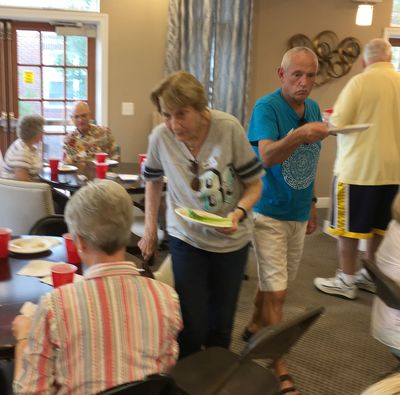 On Sunday, September 24th the Social Committee held it's first "End of Summer" cookout.  There was a large turnout of Community members in the Clubhouse for the event which featured everything from hamburgers and franks cooked on the Clubhouse patio to home cooked potato salad, pulled pork and hand baked cookies and brownies.  The food was excellent and the turnout was great...so good in fact that the committee is already considering making this barbecue an annual event.  Above are some random snapshots taken at the party.

Monday Morning - Coffee At The Clubhouse 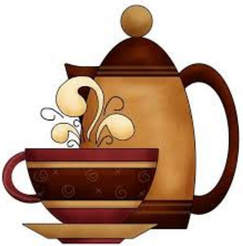 A Batch Of Klatch Photos 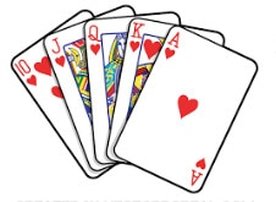 A Few Glimpses Of The Card Party At The Clubhouse On June 27th, 2017

On Saturday, June 10th the tables in the Clubhouse held more than a few snacks.  Along with Sangria and brownies the room's tables were home base for a bevy of small easels and aspiring artists as the Gathering's Social Committee played host to this year's first Painting Party. Teaching the group, most of whom had never done a water color painting before, was Emily Thomson the daughter and manager of her family's popular Manassas Olive Oil Company in Old Town. Emily is a superb artist in her own right and regularly teaches classes in the Candy Factory.  Her paintings are also on sale in the family store.  Brush-stroke-by-brush=stroke she was able to demonstrate how to create a small, credible painting that depicted a color filled sky with the sun setting on a mountainous beach as white crested waves washed ashore. The evening was not only fun and sociable but foremost, it created some lasting mementos done by the guests own hands. Was another Grandma or Grandpa Moses discovered at this party?  Perhaps!
Place your cursor over photo to reveal slideshow controls.  The show is automatic but can be stopped or advanced forwards or backwards using controls in the upper corners of the photos.

Interested in morning or afternoon games here at the Gatherings Clubhouse?
Dominos
Boggle
Uno
Tri-omonos
Bubbikub
Scrabble
​Bingo
We are hoping to get several more neighbors to join us for games.  Contact me if you'd like to play.
Charles Kinamore Bldg. 4 #109
ckinamore@gmail.com
(703) 335-6576
It Was A Great Evening of Flowers and Fun
On Thursday, April 27th our Clubhouse was full of residents learning-a-lot and laughing-a-lot as the Social Committee played host to Doug Burroughs owner of the Flower Gallery of Manassas.  Not only was it an informative lecture about how to make and maintain beautiful floral arrangements but, it was also an unexpected stand-up comic routine drawing its humor from the life story of Doug himself along with his keen observations of the world around him. At the end of the evening three lucky attendees won the arrangements Doug had created during his one-man show.  We caught up with one of the winners and three of her friends from Building 4.  She's Janet Turner and she claims the flowers she's holding in the picture below is the first time in her life she won anything.  It was a great evening and there's serious talk of doing it again.
Click any photo to enlarge. 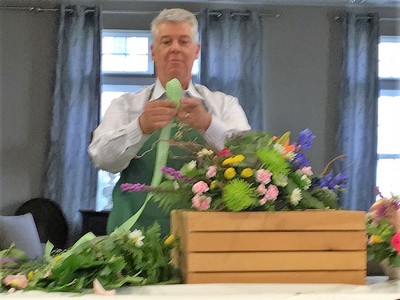 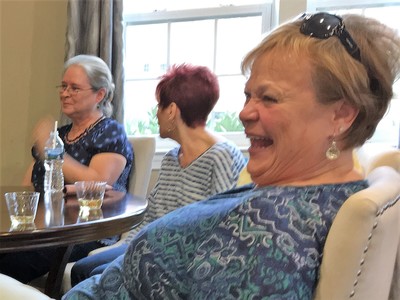 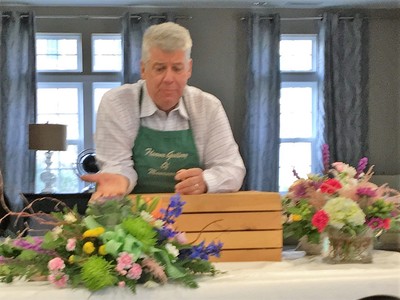 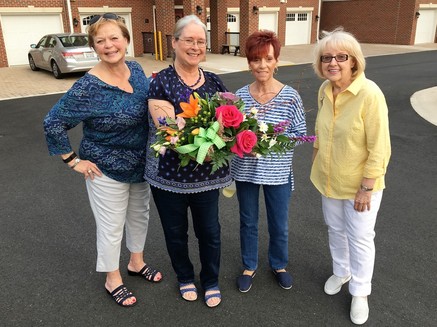 At the Board of Directors Quarterly Meeting on March 8th, Marybeth Franklin, Chairperson of the Social Committee, reported that the Wine Tasting event that took place on Saturday, March 4th attracted 19 guests at $12 per person.  The Committee has accumulated a small surplus of funds for their self-funding activities and has yet, this year, to tap into their budgeted allowance.  The rainy day they are saving for is Christmas.

To Reserve Time in the
Community Clubhouse
Contact: Crystal Williams

Crystal Williams
(703) 230-8580
cwilliams@scs-management.com
Click the button below to volunteer for The Social Committee