The Time for Well Spouses to RAISE Our Voices is Now!

The RAISE Family Caregivers Act became law in January 2018. It directs the Secretary of Health and Human Services (HHS) to develop a national family caregiving strategy. See https://acl.gov/programs/support-caregivers/raise-family-caregiving-advisory-council for background information about this law and the Family Caregiving Advisory Council which the law created.
The Administration for Community Living (ACL), the HHS agency responsible for carrying out the law, seeks public input about challenges faced by family caregivers and recommendations to address these challenges. This request for public input is an important opportunity for spousal caregivers, and every member of the Well Spouse Association is urged to take full advantage of it. Submissions can be made via this easy-to-use on-line form: https://acl.gov/form/public-input-raise .  Your submission can be anonymous.
Each submission is limited to one 750 words-or-less caregiver challenge, and one equally short recommendation to address it—but you can send in as many separate submissions as you like.  The deadline for completing the on-line form is February 7, 2020.
Now is the time for spousal caregivers to raise our voices and express our concerns, and let our ideas about solutions be known. It will take only a few minutes of your time.
One more thing: please share your submission electronically (and anonymously if you wish) with the Well Spouse Association national office at wellspouseoffice@gmail.com . WSA will compile and make good use of your responses. 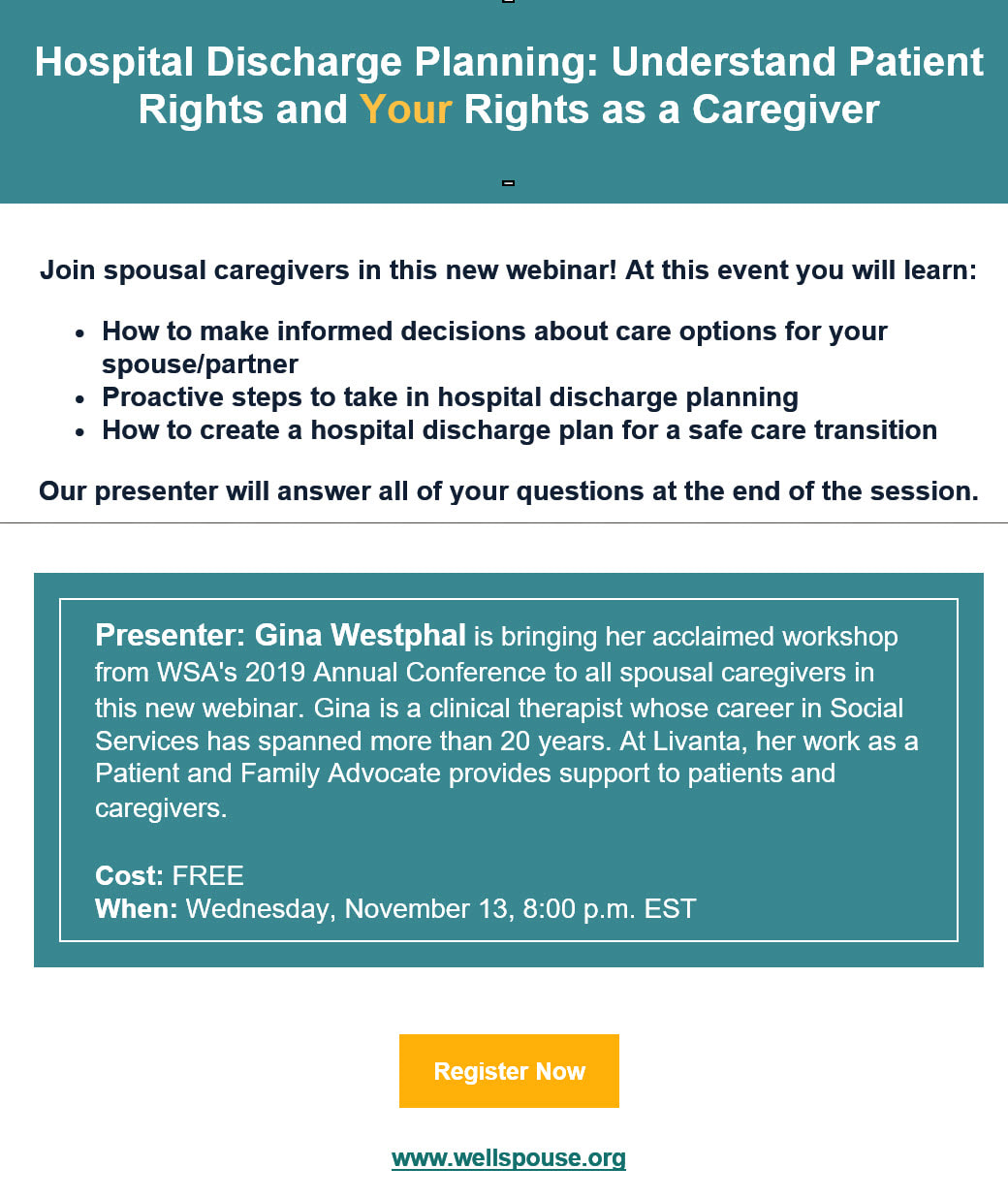 Join us on Tuesday, November 12th for this Caregiver Support Call for Family Caregivers of Older Adults. Our topic for this session: National Family Caregiver Month
Register: https://www.fairfaxcounty.gov/hscode/EReg/Registration.aspx?groupID=16

​As the season turns to Fall our eyes are on the end of the year and the need for Congress to act in order to preserve the medical expense deduction income threshold at 7.5%. The threshold reverted to 10% for all filers on December 31, 2018 so the more than 4 million Americans who count on this deduction will be blindsided when they go to file their taxes next year unless this is resolved immediately.

Thr AARP will be focusing its advocacy efforts in the next months on impressing on Members the financial hardships that will hit millions of sick or chronically ill Americans if action is not taken before the end of the year. We will also be encouraging Members to co-sponsor both S.110 and H.R. 2073, bills that would make the 7.5% threshold permanent for all. At the same time, we want to make clear that even without a permanent fix, it is crucial that at least a temporary extension is enacted before December 31.

We will be sharing a coalition letter shortly, but we strongly urge each med-ex coalition member group to reach out to Members individually. Write letters to House and Senate leadership and as many Members as feasible to demonstrate the depth and breadth of support for this deduction. Those individuals that your organization represents are also encouraged to send personal letters to their Members in support of maintaining the 7.5% threshold. Many Congressional offices are asking for personal stories from constituents, and it would be quite helpful to provide them.

Call, email, fax or send a letter to your Senators and Representative and ask them to make the 7.5% threshold permanent. . Or call the Capitol switchboard at (202) 224-3121 - an operator will connect you directly with the Senate or House office you request.

A Note To Roger From The AARP

In short, this bill would be a huge step to lower drug prices and our lawmakers should vote YES. Will you call 1-844-449-9466 NOW and tell your lawmaker to support the Lower Drug Costs Now Act?

We made it easy: Call 1-844-449-9466 and give your ZIP code so you can be connected with your federal representative. We’ll give you a few talking points before you’re connected. You can also get some talking points and report back on your call here.
The Board of Directors invites you to visit, contribute to and enjoy our Community website.
We welcome your comments on this resident-generated endeavor. Leave a
comment by clicking "Contact" on the Menu Bar.