If automobiles were people at least two of them would easily meet the 55-year-old age requirement to become members of our community. Both autos are Ford Thunderbirds - the personal luxury cars popularly known as T-Birds.  These two award-winning classic cars belong to our neighbors in Building 5 - Peggy and Warren Hayes.  As you will find out just ahead, the cars are just a few of the rare and unusual things which, through the years, have involved these ever-active world travelers. 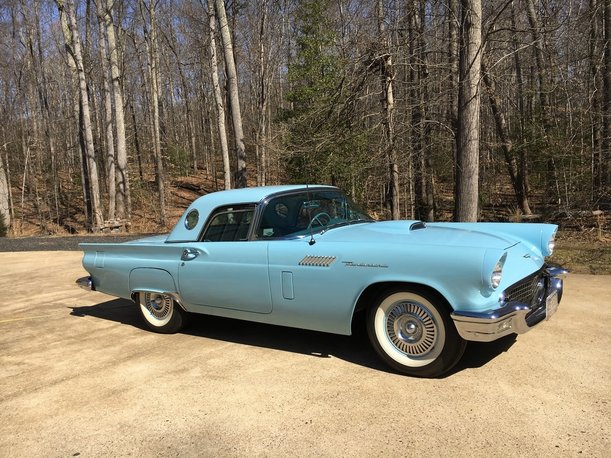 Peggy and Warren take pride in their perfectly restored 1957 azure blue T-Bird - a sporty, two-seat hard top convertible with unscuffed, wide, white wall tires. It seems to have just rolled out of a new car showroom. ​However, the Hayes's did not buy their sparkling blue car, with the round portholes in its heavy fiberglass top, at a new car dealer.  When they found it the car was not in peak physical health nor anything near it. The ailing T-Bird was in a junkyard with about half of its parts missing.   There was no top, no hood, no you name it. The Hayes's rescued what many would probably have considered a hopeless pile of junk and slowly reconstructed this wreck to its original condition.  Along the way, they discovered that Ford had made only a few hundred of these 1957 models with the unusual azure blue paint job. The factory, nearing the end of production of this model, ran out of paint before they finished fulfilling their schedule.  To complete production they used the blue paint from the coming 1958 model making this 1957 car rare right from the beginning. Today, a T-Bird like this is worth almost 9 times more than it's original list price. ​​ 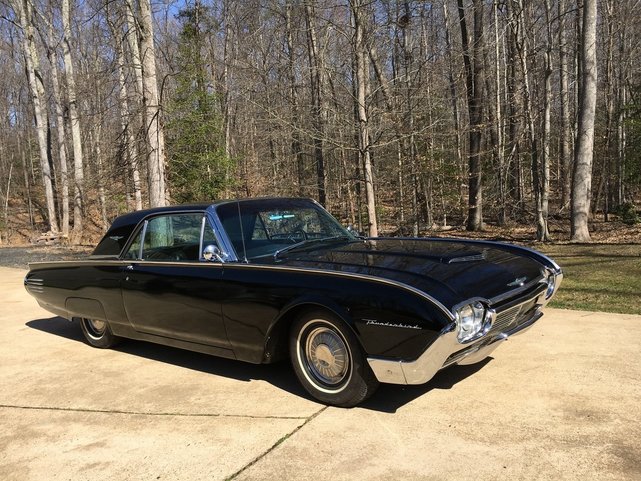 The Hayes's other show piece car is also a classic. It's a 2-Door 1961 black Thunderbird hardtop coupe. It has a Swing-Away Steering Wheel which makes for an easy entrance into the car. It was introduced with this model.
​The Hayes's 1957 T-Bird gets under 13 miles per gallon while the heavier 1961 model comes in at about 11 mpg. Both cars have engines that are in the mid-to-upper 300 horsepower range. They require leaded gasoline which is no longer available at the pump.  The cars demand 'no fuel but an old fuel' so, to satisfy them, there are bottled lead additives available to make their short round-trips possible without ruining their engines. There's no air conditioning in the blue T-Bird.  When it gets hot inside cooler outside air is let in by opening flaps on either lower side of the passenger compartment.

Neither of these T-Birds reside in our parking areas nor in our condo's garages.  Instead, they are housed nearby in a special private garage with other makes and older models of memorable autos.  ​​However, it's possible that you may have already encountered the Hayes's prize winners in person. If you sometimes travel Prince William Parkway, on your way to-or-from Woodbridge, you may have had a glimpse of these beauties in action. Depending on the weather, the road conditions and the time of day Warren and Peggy occasionally take them both out for a short, round-trip up and down the parkway. These quick trips, taken about once-a-month, help to keep the cars working as well as they look. In fact, they look so good that surrounding traffic usually slows down to give today's modern cars a fleeting chance to see their ancestors in action. In addition to these short hops, the T-Birds are also taken out for longer trips to be exhibited at car shows where they have made a habit of coming home with still another certificate or trophy signifying their excellence. 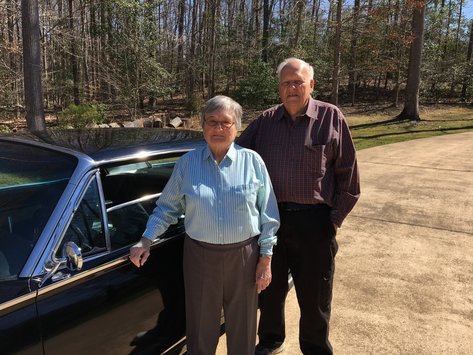 ​​Warren and Peggy retired to The Gatherings after productive work careers.  A native of Philadelphia Warren attended the University of Pennsylvania where he majored in Business Administration. ​After a number of jobs in real estate and marketing Warren served a stint in the United States Army as an Accounting Information Specialist from 1958-1962.  In 1965 he joined the Mobil corporate real estate division where he handled contracts for everything from bulk storage facilities to new service stations. Mobil soon moved him to their Fairfax offices and he took up residence in Manassas. His retirement from Mobil came in 1995. However, he kept busy by going back into real estate and marketing before retiring for good some years later.

Warren's wife Peggy started on her 48-year career path when, at the age of 18, she began her studies to become a licensed practical nurse. After achieving that goal she became a registered nurse and then went further by earning a masters degree in nursing administration from George Mason University.  Peggy's specialty in nursing was in the difficult field of pediatric intensive care where she applied her extensive medical and administrative knowledge .

She met Warren at the University of Pennsylvania in 1965 which led to their 51-year marriage. They have a son, Mike, who, after graduation from Virginia Tech, became a software engineer. Besides her interest in classy old autos Peggy is also a talented clarinetist. She performs regularly in the wind section of the excellent Prince William Community Band. As you can see. even after retirement Peggy's interests and skills continue to cover quite a range... from classical music to classic cars... and from Tchaikovsky to T-Birds.