Genealogy - From The Gardens of Eden To The Gatherings At Wellington

​Bill Stanco Tells Us How To Populate Our Family Trees 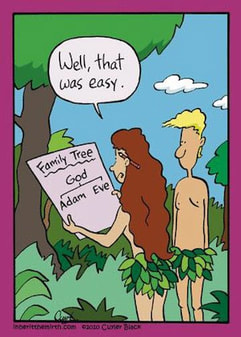 ​
​Just about everyone, at some point in the their lives, wonders who their ancestors were. Very few of us can lay claim that we absolutely know for sure what, for example, our great grandfathers and grandmothers did for a living or from which country they might have emigrated.  Tracing one's forebears back as far as possible is a rewarding endeavor called genealogy.  As the accompanying cartoon shows it was once quite easy to find out who populated your family tree.  However,  in the many years since the time of Adam and Eve the task of finding out who has a place in your current family tree has become quite complex.   These days the genealogy adventure takes one on paper and electronic paths. Not only do these ventures reveal who your distant relatives were it also takes you back into world history which, in itself,  can also be totally fascinating. 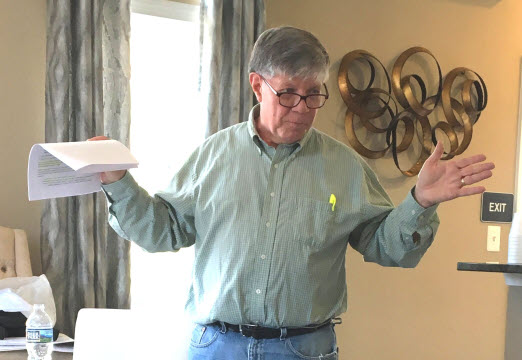 Here, at The Gatherings, we have a long-time and skilled practitioner of genealogy who gave a wonderfully informative talk at The Clubhouse on April 14th in which he laid out the basic methods people can use to go about finding out who their ancestors were, where they came from, what they did for a living, where they lived, how many children they had and even the circumstances of their deaths. The talk about delving back into the long and complex history of one's family was given by Building 2 resident Bill Stanco.


Before he retired Bill spent his time behind the scenes in the U.S. Congress gathering and analyzing information which helped our elected representatives formulate the laws we live by.  In the last 14 years of his employment he was a Congressional Investigator with the House of Representatives Committee on Appropriations.  Bill never left a stone upturned in his information quests because he felt that even the smallest fact had to be taken into consideration in the legislative process.  Those in Congress would have appreciated having Bill on their staff if they were really interested in creating laws based on truthful facts.  As he honed his research abilities Bill began to gather another set of facts.  This second set led him to write an article for The Capitol Dome. which is the magazine of the United States Capitol Historical Society.  Bill's story (one of four he wrote for this publication) detailed the history of the annual Congressional baseball game in which Democrat and Republican members of Congress continue to face off for charity on the baseball diamond each year.  It is a tradition that can be traced back to 1909. 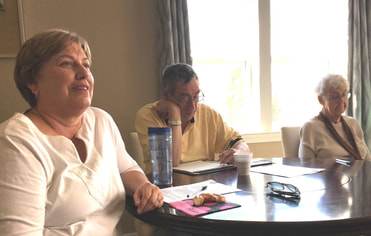 ​While Bill was researching back 100 years for his baseball story he continued to dig up information not related to baseball but related to his own relatives.  He looked into every nook and cranny in which information was available to put together a picture of his family -  some of whom came to this country from Ireland and others who came from Italy.  Gradually, and with a lot of time and money spent on his project, he gathered enough material to put together two large-sized illustrated books about the origins of both his and wife's families.  He shared those bound volumes with his audience in the Clubhouse.  He also shared another volume with additional information he discovered after the two original books were completed.  And, he is still not finished!

​Below are some documents that Bill Stanco created for his listeners.  One of them is the detailed outline of his talk on how to go about beginning and carrying out family research.  It not only includes references to places one might visit locally to get family information but it also has on-line addresses of sources of ancestral material as well, with much of it collected by the Mormon Church. Also included with Bill's talk outline is a chart that helps a beginner by listing the basic information one needs to get an ancestry project started.  Finally, there is a chart-like tool for using the U.S.Census as a prime research source.  Bill's printed tool does not include the year 1890 since that was the year a fire destroyed all the stored census records for that period.
​

Download File
​As one listened to Bill it became evident that delving into one's family background is a time-consuming and sometimes expensive endeavour.  It requires patience as well as a willingness to pursue leads which may or may not bear fruit.  However, when the job is done - and usually it's never done - the result is information that a family can learn from and enjoy. Bill's methods do not involve the use of DNA since he feels that method is still too early in its evolution to give the accurate results he obtains by scouring data bases, voting and draft records, U.S. Census reports and other sources of information. In The Gatherings on April 14th Bill Stanco proved that when it comes to collecting information on one's family's history's he is the prime Gatherer who can teach us all.
The day after Bill's talk an article appeared on the Op-Ed page of The New York Times about genealogy and history which we thought would be of interest.

The Historians Versus the Genealogists
​
By JOHN SEDGWICK 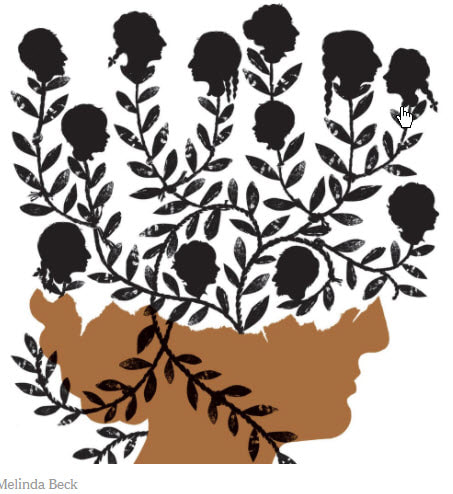 ​At a time when history has never been so widely and blissfully ignored,  millions of Americans are busy spitting into DNA-collection tubes, scrutinizing old newspapers and tracing their family history back as far as they can via the website Ancestry and other services. Historians like me tend to scoff at these attempts. Who cares if you’ve just found out you’re related to George Washington’s aunt? So what?

But that was before I learned of a relation of my own, a Connecticut woman from the early 19th century named Harriet Gold, and I’ve gotten fairly obsessed with her
.
In my defense, she is a figure of genuine historical interest. I included her in a book of history I was writing without even realizing she was, as the genealogists say, “one of ours.” She turns out to be the grandniece of the man who lies under an obelisk at the center of my family graveyard — the “founder” of our clan.


Now you’re the one going — so? Here’s the thing: Suddenly that book was no longer just by me. It was also about me. Two different books. History and genealogy, after all, are two radically divergent takes on the past. The first says, “This matters.” The second says, “This matters to me.”

I should cop to having my own genealogical interests, having written a multigenerational family memoir that traced my New England WASP roots back to well before the Revolution. It never crossed my mind that my new book — about a pair of rival Cherokee chiefs in Georgia from the time of the Trail of Tears — could possibly have anything to do with me.

The very remoteness of the subject was part of my fascination, and the two chiefs haunted my imagination. One of them was the shrewd principal chief, John Ross, a pint-size descendant of Scottish traders; the other was his chief counselor, a warrior called the Ridge, for He Who Walks on Mountaintops. Although Ross spoke mostly English and the Ridge mostly Cherokee, they joined together in 1827 to write a constitution that created the modern Cherokee Nation, with a government featuring a chief executive, legislature and Supreme Court.

But then the grand enterprise went south — they turned against each other over the issue of removal to the Oklahoma Territory pushed by President Andrew Jackson. The Ridge was ultimately slaughtered by his rival’s followers, and a civil war erupted in the Cherokee Nation. I tried to tell the tale from the Cherokee perspective, showing them as far more than helpless victims of white oppression. The suffering was horrible, but made all the worse because the two chiefs’ unified stance collapsed over an existential question that all Americans can understand: If I abandon my old ways and leave my native land, can I still be myself? The Ridge believed yes and argued the Cherokee should go; Ross thought no and insisted they stay.
In embracing the new, the Ridge had sent his nephew, Elias Boudinot, to be educated at the Foreign Mission School in Cornwall, Conn. This is where “my” Harriet Gold comes in. She met Boudinot in the spring of 1825 at church. The two corresponded and fell deeply in love. This was not well received in Cornwall. Its leading families were proud to turn Native Americans into educated Christians. They did not want them to marry their daughters.

Gold so dreaded the reaction of an adored but tempestuous brother to her plan to marry Boudinot that she let him know by handing him a letter, which she made him promise not to read until after she’d left the room and run upstairs. Even so, she could hear his screams — “Harriet! Harriet!” — from the parlor. Later, he burned an effigy of her on a funeral pyre. Gold’s parents reluctantly allowed the young people to marry, and they left together for the Cherokee Nation, never to return. All of this is recorded in letters, journals and newspaper accounts from the time.

Back in his native Georgia, Boudinot went on to edit The Cherokee Phoenix, a national newspaper. Gold herself fades from the historical record. We know only that she and Boudinot had five children, and she died in 1836 from complications of the birth of the sixth.

It wasn’t until after the book was done that I discovered that a novel, written by one of my relatives in 1827, drew on the story of the Boudinots’ marriage. A scholarly article revealed that Gold was my ancestor’s first cousin.

As a historian, I couldn’t take the story past the facts. But as Gold’s relative, I felt I could hear her brother’s shrieks and imagine what she must have felt while fleeing Cornwall and entering a strange new land full of rising tensions. The whole lot of it.

For a historian, such a leap of imagination amounts to malpractice. But it delivered a more felt connection to the story than straight historiography had been able to provide. Obviously, history can’t depend on genealogy. But history shouldn’t scorn it, either. History can make use of the genealogical perspective and its transporting empathic power.
​
But let’s broaden it out — not just to identify with one character selected by family lineage, but with all the characters by virtue of our common heritage. To be Harriet Gold, but to be Elias Boudinot, too. And Ross and the Ridge, besides. Try to see and feel life as each of them did. We’ll never fully succeed, but the effort can help collapse time and make for a history we can all relate to. This is the lesson of America: We are all family here.

John Sedgwick is the author of “Blood Moon: An American Epic of War and Splendor in the Cherokee Nation.”