Proposed Changes To Improve Our Neighborhood
​
The Grant Street Streetscape 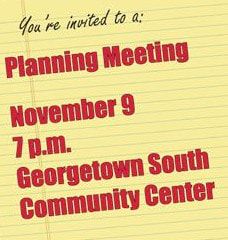 New Board of Directors President Alan Marsilio has been following a developing story which you may find as interesting as we have.  He asked us to call your attention to it:

As you probably have long ago noticed the City of Manassas is still growing and constantly improving itself.  One of the areas which is in the planning stage for a major upgrading is right around the corner from The Gatherings.  It is Grant avenue beginning at Wellington Road and going north past the railroad underpass and just past Church Street to Lee Ave. The city has already announced plans for a new Fire and Rescue Station on Dumpfries Road south of McDonalds.  And, a new police station is going to be built on property along side of the Discount Plaza on Grant Ave.  When the construction of the police station was announced it was also noted that Grant Avenue itself would undergo a major overhaul to improve traffic safety and to beautify the area with new crossings, sidewalks and plantings. Now, you can go to a special Manassas City web page to see what is being proposed.  We've included below  just a sampling of what they are thinking about in the graphic shown below.  The web page includes maps, drawing and aerial views of the project as it now envisioned.

Click on the arrow to get to all the information.  ►

​One other note about the web site:  One of the engineering plans shown is rotated 90 degrees to a vertical position so it could be included.  Even with this inconvenience you can get a good idea from the site of what's coming in what is now known as the The Grant Street Streetscape. 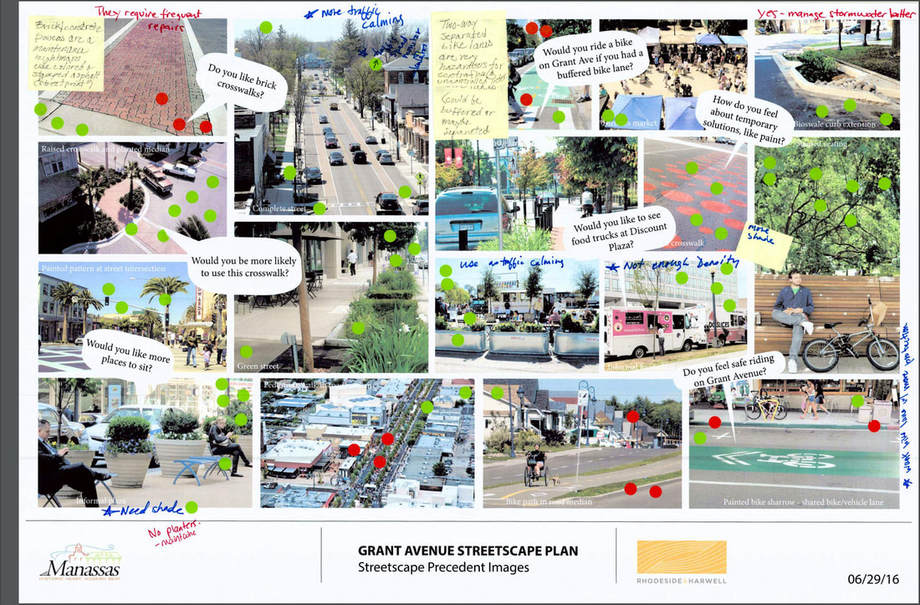 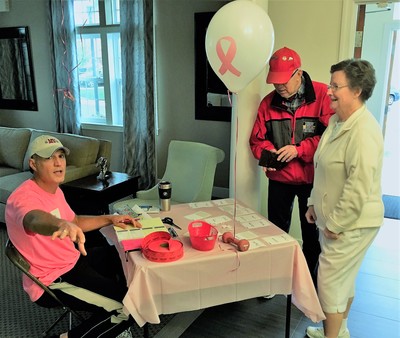 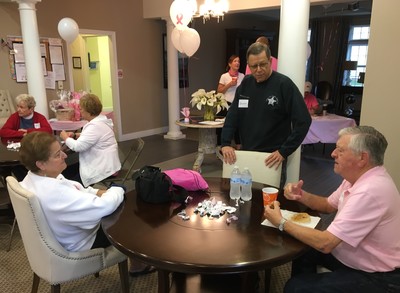 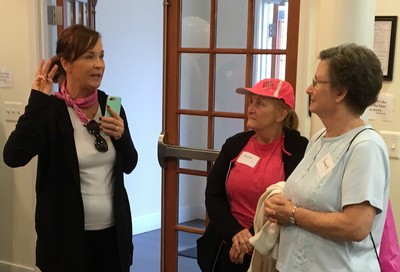 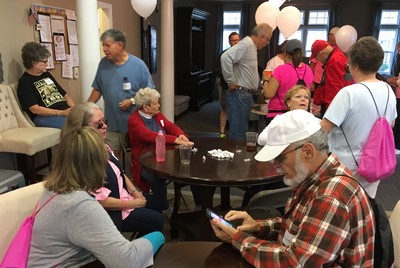 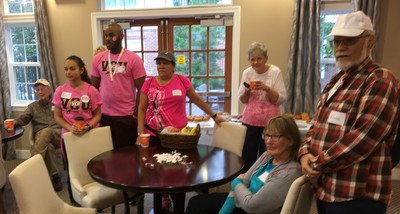 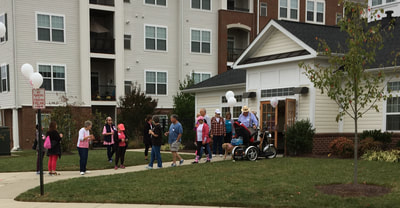 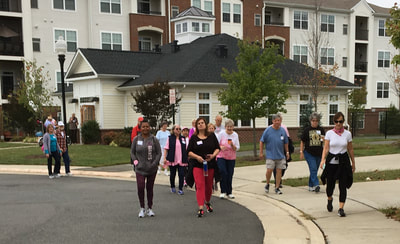 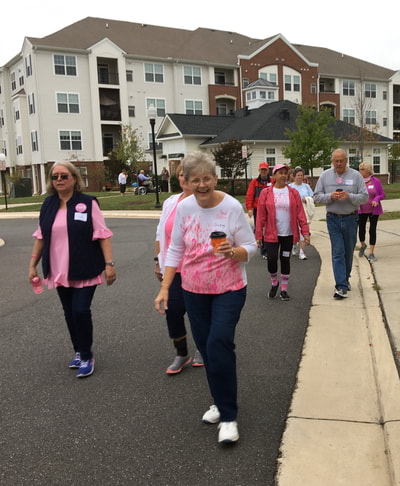 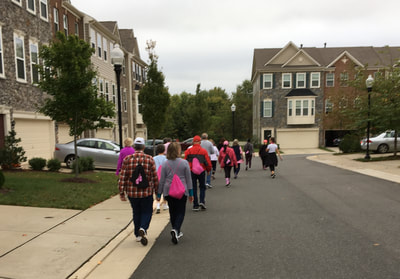 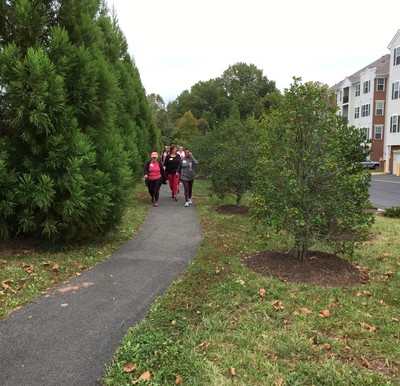 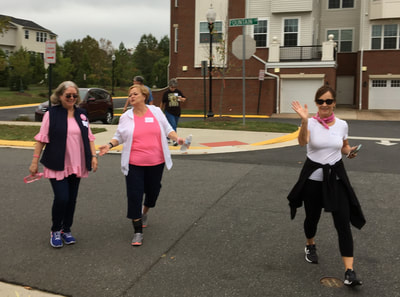 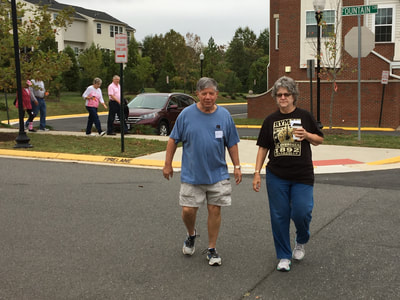 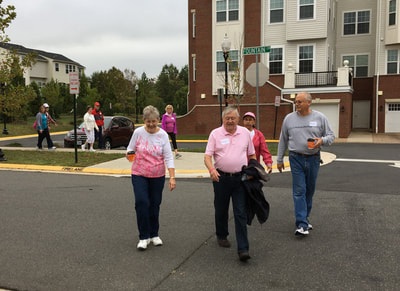 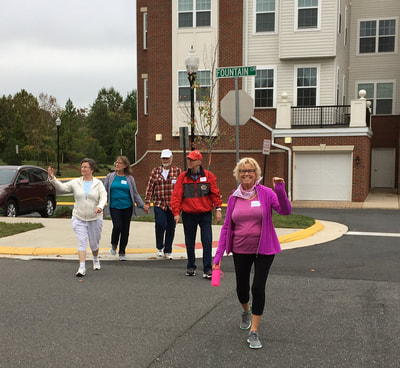 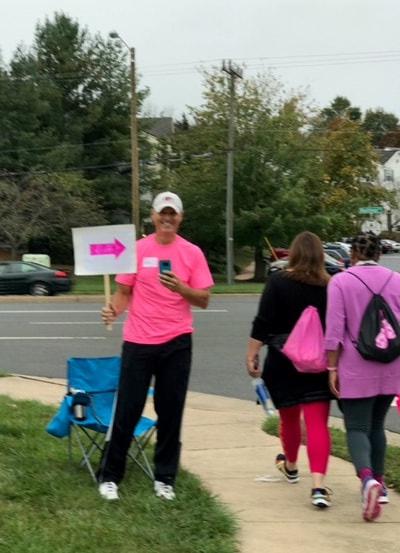 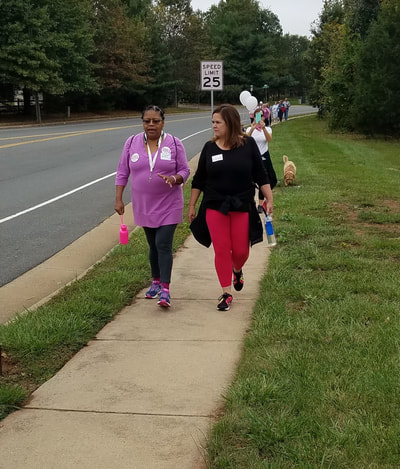 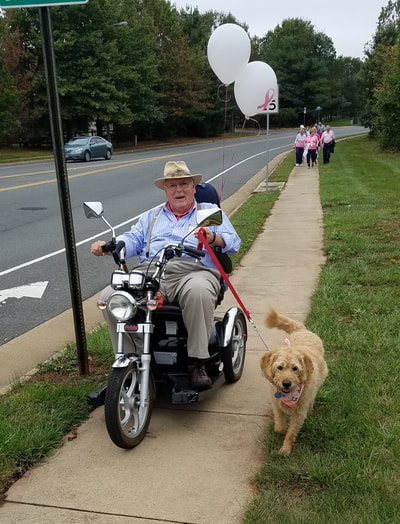 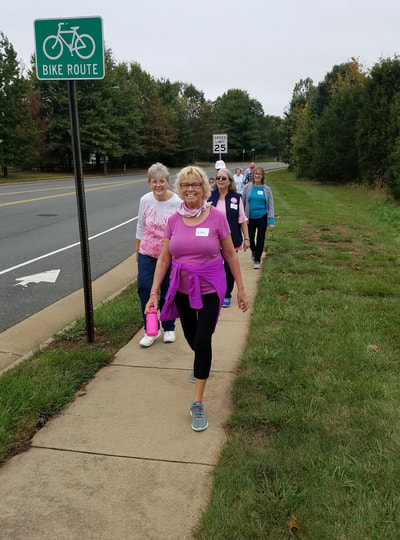 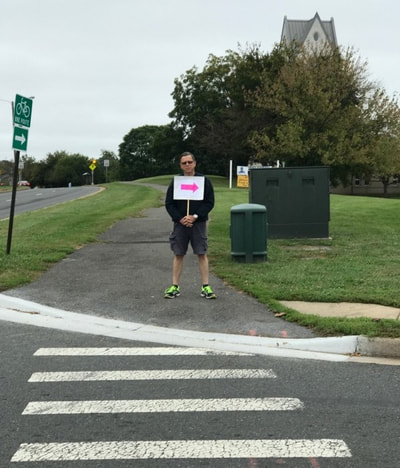 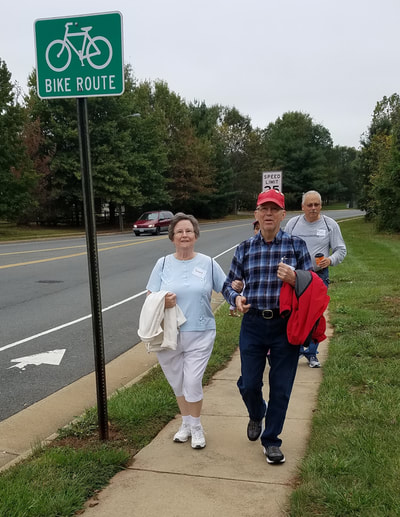 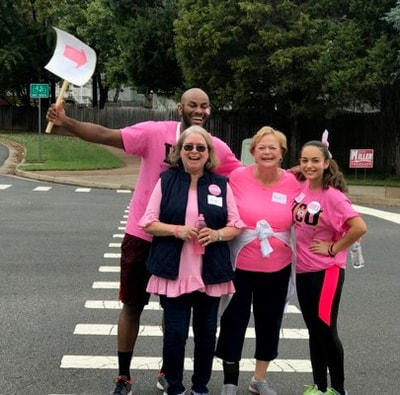 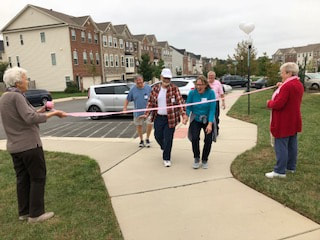 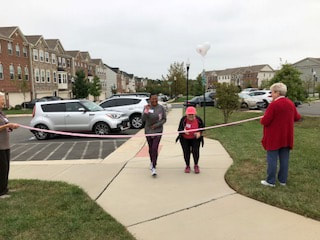 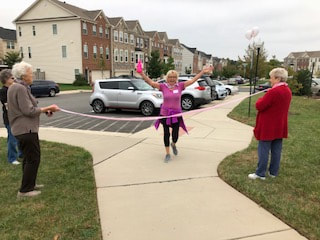 A Thank You To The Walkathon Participants

Paula Julian, one of the Walkathon's organizers, received the following letter that she wished to share with all the residents of The Gatherings.

New Fire and Rescue Station Coming to Our Neighborhood

Pictured below is a rendition of the new Fire and Rescue Station 21 which will soon be built around the corner from The Gatherings on Dumfries Road.  The following web page has all the information about the project including its mission, its cost, location maps and its expected completion date..  Just click on the arrow to get the details  ► 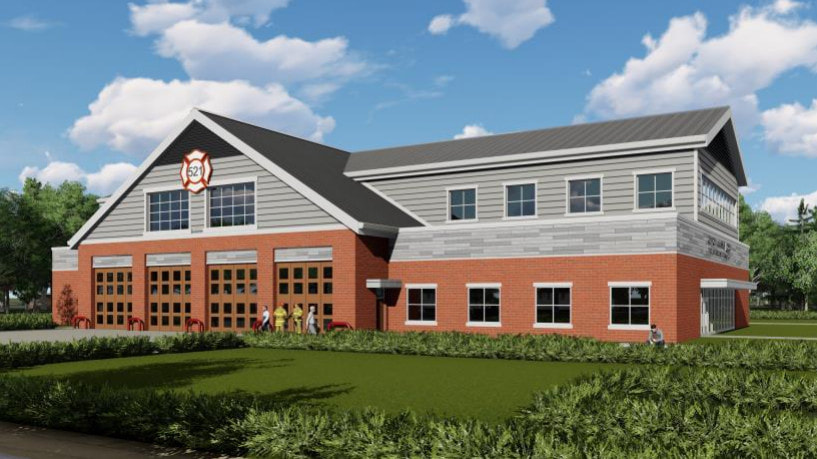 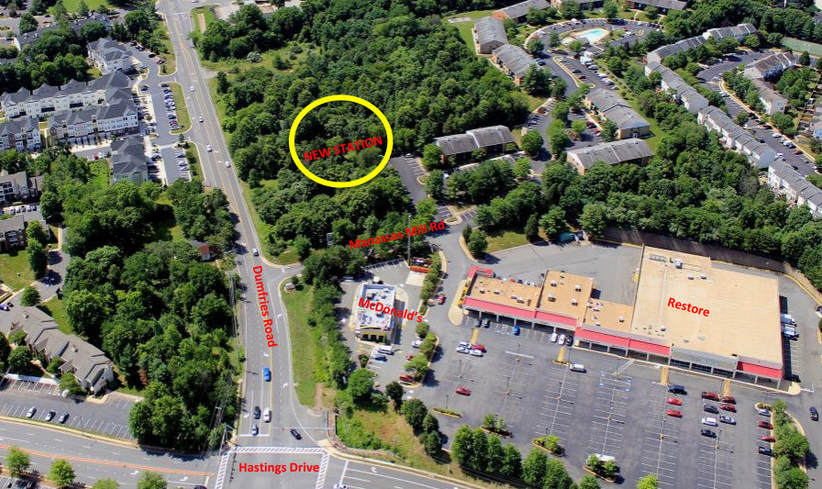 ​The following notice was published at the City of Manassas September 6 Planning Committee Meeting:

PUBLIC FACILITY REVIEW
CPA #2018-01
10224, 10228, 10306, 10312, and 10316 Dumfries Road
Fire and Rescue Station #21
Mr. Arcieri stated that the City selected an available site on Dumfries Road as the preferred site
for Fire and Rescue Station #21. [In the vacant lot adjacent to the 7-Eleven just south of The Gatherings]
On July 24, 2017, City Council agreed to move forward with a
purchase and sales agreement at a price of $1.6 million, subject to a 60-day due diligence period.
The proposed location for this new fire and rescue station is consistent with the adopted
Comprehensive Plan and the requirements of state code. 3
Planning Commission Minutes – September 6, 2017 DRAFT - Page 2
Staff recommended approval of CPA #2018-01 as submitted.
(Chairman Clark entered the Council Chambers at 7:45 p.m., and Ms. Wilson was relieved as
Chairperson Pro-Tem.)
Planning Commission Questions/Discussion
· Ms. Trautwein asked if the volunteer fire station near the courthouse would be closed.
Chief Clemmons stated that it would be closed and would become a part of Fire and
Rescue Station #21.
· Ms. Trautwein asked about what would happen to the vacant building. Chief Clemmons
stated that a feasibility study is being done to evaluate options for the vacant building.
· Ms. Trautwein asked the Chief to explain the reasoning behind the numbering of the
stations. Chief Clemmons stated that the City of Manassas is under a consolidated
dispatch agreement with Prince William County, and Prince William County assigns the
station numbers.
· Ms. Trautwein asked Mr. Arcieri whether there were any concerns voiced by the neighbors
surrounding the proposed fire and rescue station. Mr. Arcieri stated that there was a
second community meeting, and the residents from the surrounding properties of the
initial proposed Lee Manor site and the newly proposed Dumfries Road site were invited.
The primary feedback came from the residents of the Manassas Meadows Apartments
regarding keeping as much of the tree buffer as possible, which is addressed by the plan as
proposed.
· Ms. Trautwein inquired about the approximate timeframe for the construction of the new
fire and rescue station. Mr. Arcieri stated that the goal is to start construction next year
with a targeted opening in the year 2020.
· Mr. Harrison questioned why certain areas are not covered within a 4-minute response
time map. Mr. Arcieri stated that this will be reviewed as part of a future capital project to
replace Centreville Road Fire and Rescue Station #01.
· Mr. Harrison asked if the City is reimbursed when fire and rescue is sent to Prince William
County. Chief Clemmons stated that it is an automatic mutual aid, a reciprocal
memorandum of understanding. (Chief Clemmons reiterated the process of how calls are
dispatched in the City of Manassas.)
· Ms. Wilson inquired as to who is the first to receive the calls for the Prince William County
Courthouse and the jail. Chief Clemmons stated that the City of Manassas runs the
majority of calls in that area because of its location.
Citizens’ Comments
None came forward to speak.
Mr. Harrison motioned to approve CPA #2018-01 as submitted. Ms. Trautwein seconded the
motion. 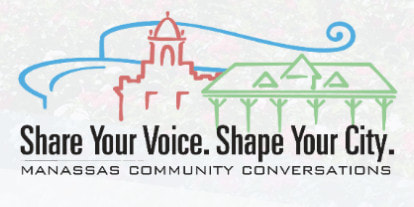 Another page on the Manassas City site concerns a schedule of Community Conversations aimed at improving the City's life.  Take a look at it and see if one of these events is of interest to you.  Click here to see the page.  ►

The Farmers Market Is Back - Announcement


This year, our Saturday market was in a new location - the Prince William Street Lot across from the new Baldwin Elementary.

​Click here to see the current Weather Channel forecast for today's and for the days ahead.  On  this    page there's also a radar weather map of our region. At the bottom of the map is a control  that          puts  the map in motion. There's also another control beside it on the map to put the map in       motion to show the  weather as it develops in the hours ahead.

​​Free updated news briefs about the area including weather, real estate listing, police reports and job opportunities are posted throughout the day on the Manassas Patch website. Click the button to go there now.

Another local news website is Bull Run Now.Com.  Although similar to the site above it concentrates on Prince William County.  One of its interesting features is a section titled "Spare Time" which has a "Calendar of Activities" page that may be of interest to you or your families. In the same "Spare Time" section there's another page titled "Charity Events" which lists many worthwhile causes, including the Re-Store across the street, that need volunteers.

In Pursuit of Ideas

Councilman Ian Lovejoy is looking for ideas to improve the City of Manassas. As a matter of fact he is looking for 100 ideas over the next 100 days.  Click his logo and you'll be able to see the website he started to start those ideas flowing in.

Well, Kay Witt, our Board of Directors Secretary, took Councilman Lovejoy up on his offer and sent him two suggestions championed by Malcolm and Dagmar Kirsop and Alan Marsilo as well as members of the community across Hendley Road from us. Briefly, these are the proposals they hope to get accomplished.:

•    We also need a crosswalk from Charleston Drive across Hendley Road. There is a child care center on one side. The school bus drops off kids at this intersection and the kids must cross the street to reach their homes on the other side of . There is pedestrian traffic across from the Oakes at Wellington through the Gatherings to the Giant Grocery store behind/beside the Gatherings. Traffic hurtles down the hill from Wellington and around the curve toward the bottom of the hill. It is dangerous for the elderly pedestrians crossing from the Oakes at Wellington and for the kids crossing the street to reach their homes. 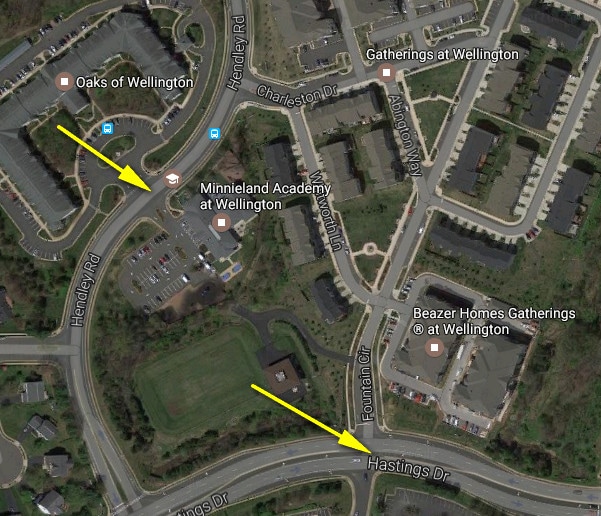 Councilman Lovejoy has now added Kay's suggestions to his growing list of ideas.
The Board of Directors invites you to visit, contribute to and enjoy our Community website.
We welcome your comments on this resident-generated endeavor. Leave a
comment by clicking "Contact" on the Menu Bar.