These Are The Yolks Folks

Dagmar Kirsop, like many others here in The Gatherings, was not born in the United States. She grew up in the middle of a violent time and place in world history. However, today, she is a U.S. citizen and lives here with her husband Malcolm. She wanted to share with everyone this short eyewitness account of a heroic event in a childhood she cannot and does not want to forget.

One Little Girl's Story About The Berlin Airlift

​As a child, I went through the horrors of World War II in Berlin.  My family had to flee and so we were evacuated from the city.  We came back to find that our home had been bombed out yet the bombings were still going on. We saw the Russians come into Berlin and do unthinkable things to all of us.  Then in May 1945, the war in Europe was over and those of us in Berlin found our city was surrounded by the eastern part of Germany which the Russians had captured during the last days of the war.  The city itself was divided up into zones each governed by one of the western Allies. The final zone was controlled by the Russians. The end of the war found Berlin to be a land-locked island. To get to this devastated city one had to travel 100 miles through territory under Russian command.  Then, in June 1948, the Russians closed all land and water connections into Berlin. We were totally isolated. The only way for us to get food and supplies was through three air corridors into the city. ​ 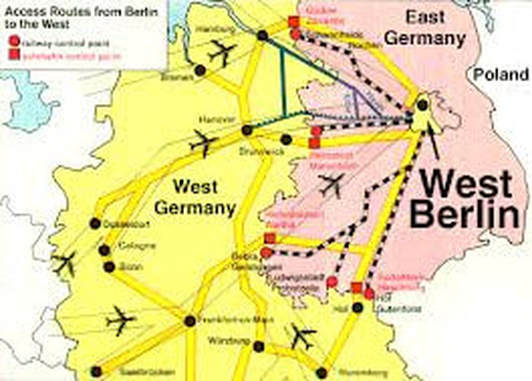 This is how the airlift into Berlin began.  The airlift was made up of American, British, French, Canadian, Australian, South African and New Zealand aircraft.  Those planes and aircrews flew 200,000 supply flights into Berlin in one year! Those courageous crews brought 8,893 tons of food, clothing and medicine every day. They brought us sacks of coal to stay warm and to provide power. The pilots even dropped candy delivered by tiny parachutes to us kids watching at the fences as the planes made their final approach before landing. The pilots wiggled the plane’s wings to signal a candy drop was about to take place. ​

​Finally, in May 1949, the Russians lifted the blockade knowing that they had failed.  At the time of the airlift, I was living a few blocks away from the Tegel airport.  My girlfriend and I were able to watch through the fence as the planes came and went in an endless procession. 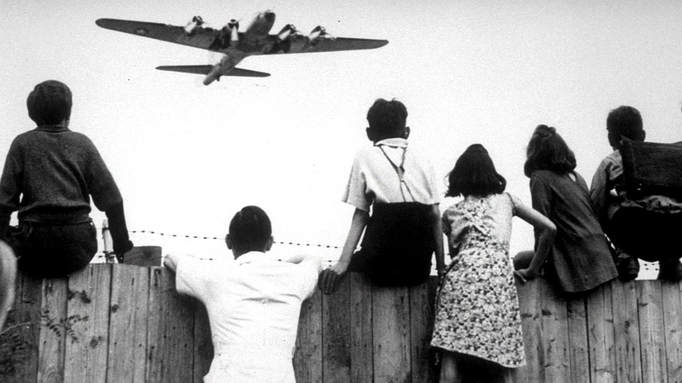 ​That period of my life is full of scenes and remembrances of horror, hunger and heroism that I will never forget.
Then, suddenly, it was 66 years later.  In October, 2015 a few of us ex-Berliners living in Northern Virginia were invited to the Stafford Regional Airport in Fredericksburg, VA to see one of the beautiful airplanes that actually took part in the Berlin airlift those many years ago.  The plane had been restored by a New Jersey resident who had flown this plane to airports all over the country to keep the heroic story of the Berlin Airlift alive.

​Back then, we called planes like these "Rosinen Bombers" (raisin bombers.)  The plane we saw that day was a C-54 Cargo plane that is now a flying museum. Painted on its fuselage is its new name "Spirit of Freedom." It is filled with photos, hand-written letters and memorabilia from the days of its historic contribution in saving the lives of those trapped behind Russian lines.  It was a very emotional visit for all of us. We had stories to tell because we the Berliners never knew each other before meeting that day. I have included a few pictures of that wonderful plane.  We were invited aboard and, among other things, saw a book titled "The Candy Bomber" (see photo) from one of the American pilots who flew into Tempelhof airport in Berlin. The last photo is the owner of the plane and myself.

I have included a link to a web site that has the complete story of this amazing man, his plane and the efforts he has made to make sure we never forget the events I saw firsthand early in my lifetime 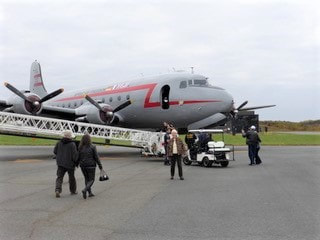 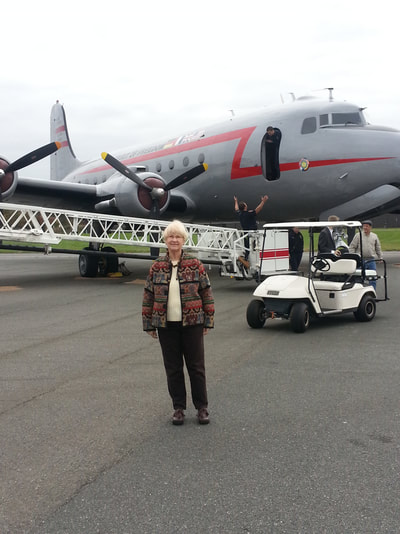 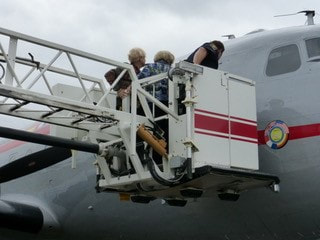 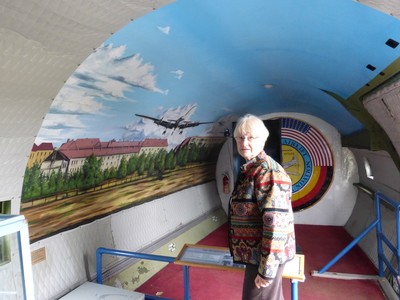 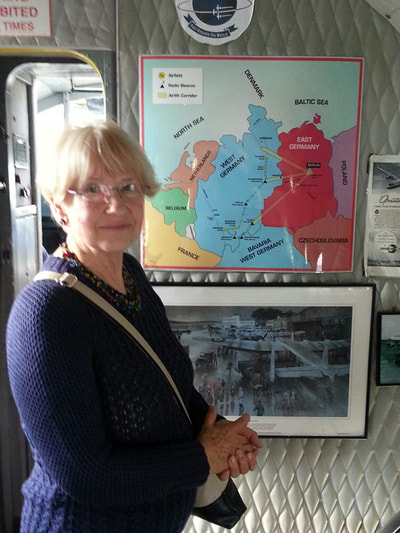 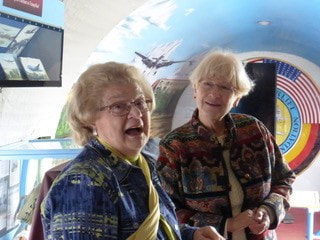 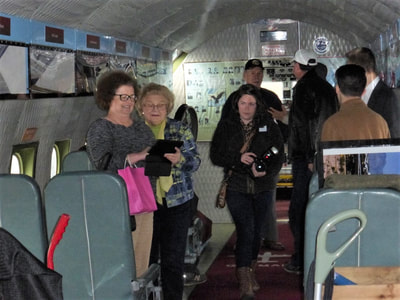 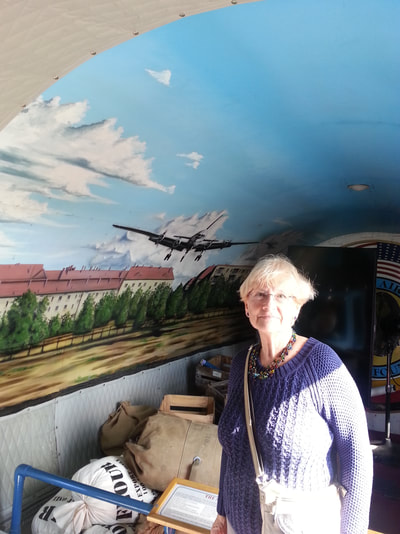 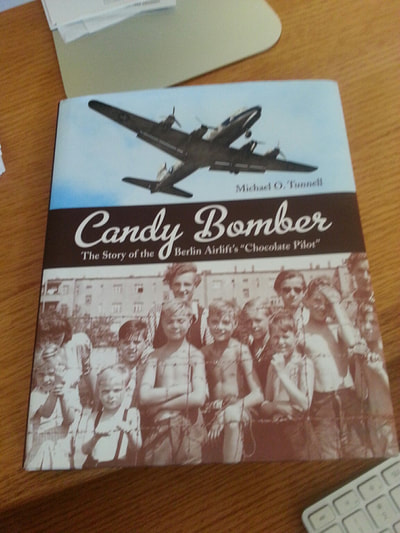 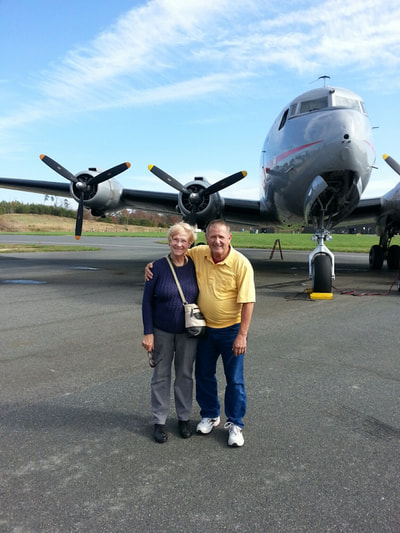 Here's a PBS video about the pilot who became "The Candy Bomber." 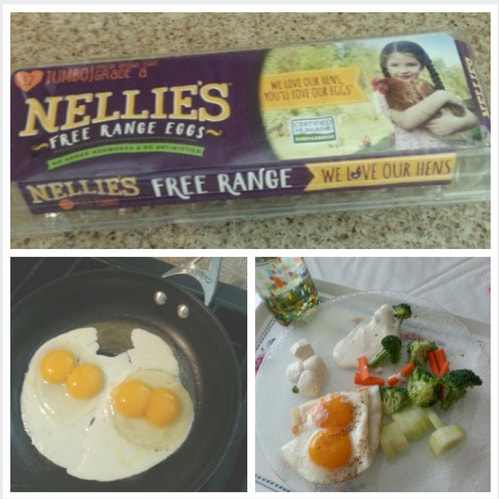 ​The other day Malcolm went to Giant to get a carton of 12 eggs. When cracking open a couple of those eggs to cook we were very surprised to find a double yolk in each egg! We looked up this oddity on the internet to see how this can happen. The articles said that it happens 1 time in 1,000 and it brings good luck to those who find one. Next time, when we cracked open another 2 eggs, there again were 2 yolks in each egg. After consuming 10 eggs from the carton we discovered that each one of these contained 2 yolks as well. We decided to call Nellie’s to let them know of our good luck. We were told that it only happens with young hens. However, they never heard of one farm producing so many double yolk eggs! The lady we spoke to was surprised in our find. She said she had never heard of so many double yolks at once. She asked us to let her know if the last two were also double yolked and sure enough they were (see pictures). Our question is: If these double yolks bring luck to the people who find them where was our luck when our dishwasher broke, the refrigerator died and the A/C went out during this very hot spell? So much for LUCK!

The saving grace was that we very much enjoyed the double portion of eggs.

Malcolm and Dagmar Kirsop - Building 3
The Board of Directors invites you to visit, contribute to and enjoy our Community website.
We welcome your comments on this resident-generated endeavor. Leave a
comment by clicking "Contact" on the Menu Bar.